Hi from Charles De Gaulle airport in Paris!! We are about to catch a flight to The Netherlands to spend time with friends in Holland and Amsterdam!!

Okay – So you only have 24 hours in Paris? Let me tell you what we did. 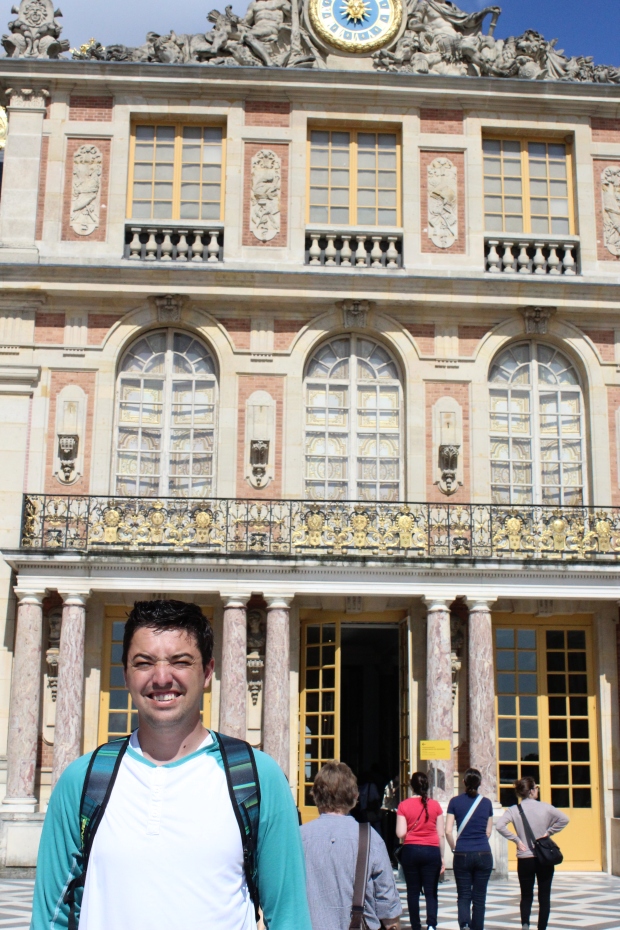 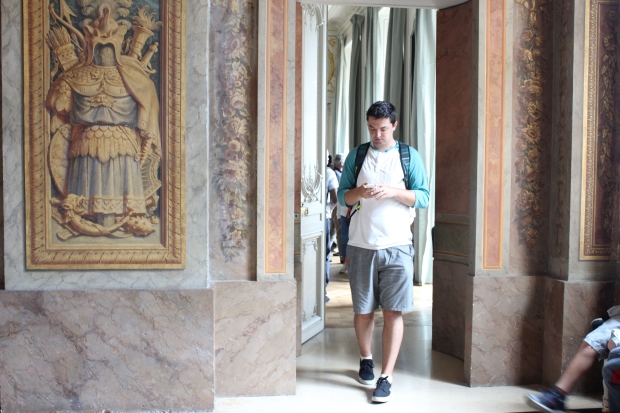 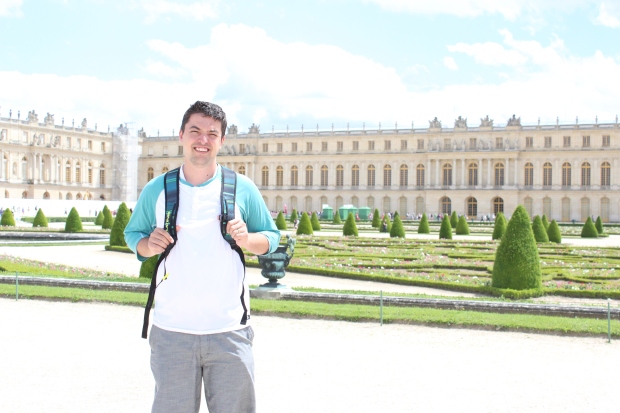 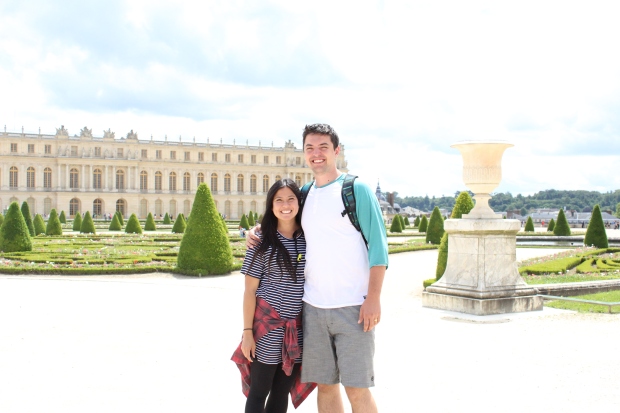 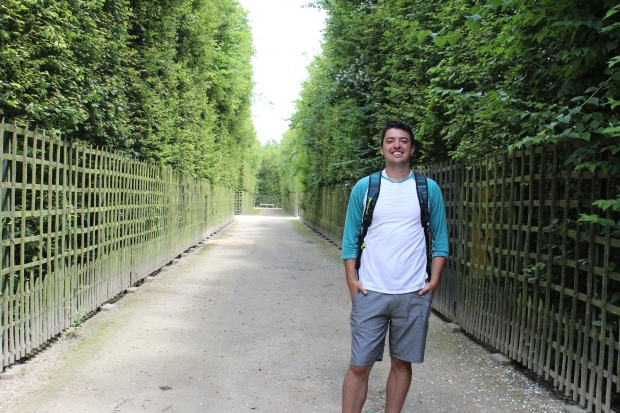 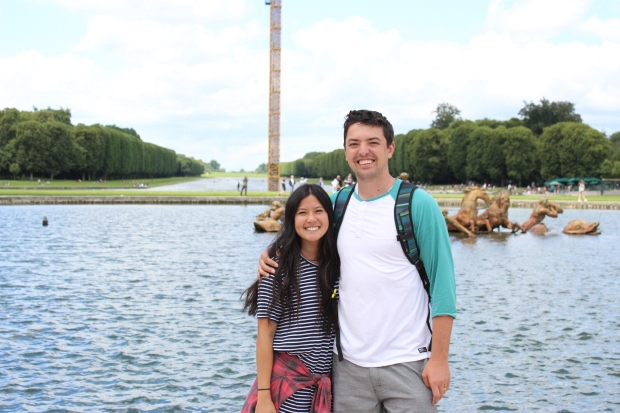 2.  We stayed at Versailles till around 2PM and caught a Taxi to the Eiffel Tower!! I loved seeing it in person. It’s so BIG and beautiful!! Way better than the Vegas one hahaha When we got there – it was SO crowded mainly because the EURO 2016 soccer games were going on right next to it! They closed off most of the gardens for safety reasons so instead of walking back to the upper gardens to get a good photo, we took one of those taxi bike rides hahahah.. FYI they don’t tell you that it’s per person so we thought it was 10 Euros but really it was 20!! We got scammed for a 5 min bike ride up the hill but it was pretty fun because he was blasting music and everyone kept dancing along as we passed them. 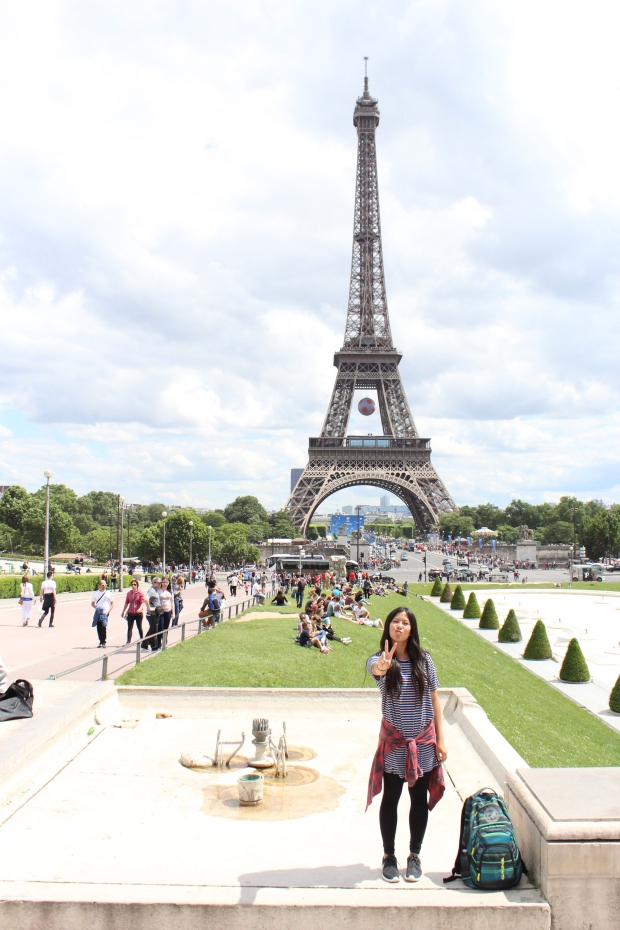 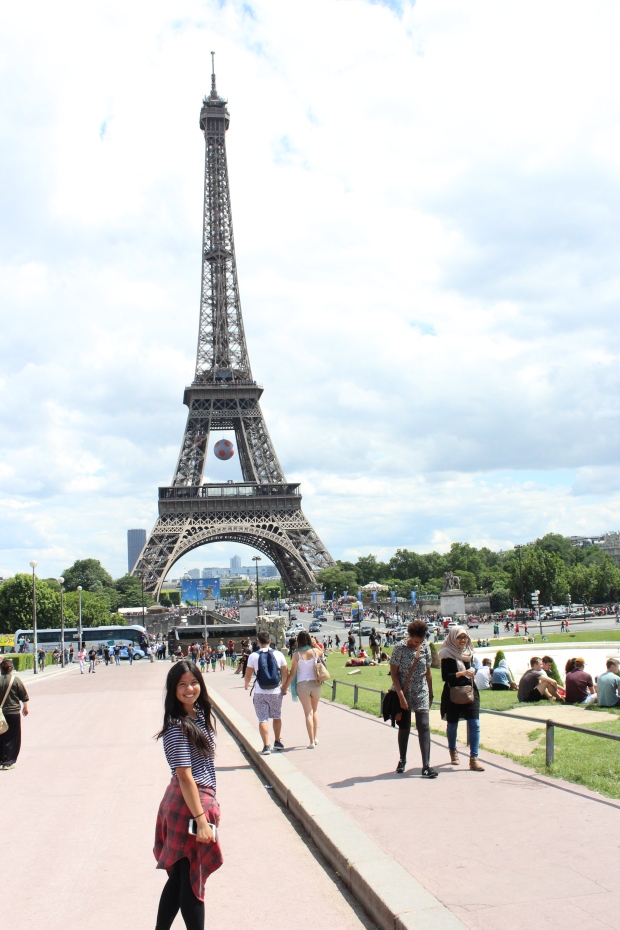 3. After the Eiffel Tower we tried to get a taxi to Arc De Triomphe but the taxi driver said.. “it’s close, you can walk there!” So he drove away and on Google Maps it said we were kind close I guess.. We walked about 30 minutes I think? But, it was the most prettiest walk EVER. All of the apartments were filled with flowers on their balcony, the shop windows were to die for and it was so clean.

4. When you get to the Arc De Triomphe – you have to go underground to get to it.  It costs 9 Euros if you are under 26 and 12 Euros if you are older to climb up to the top.  Definitely worth it and also calorie burn because you go up soooo many flight of stairs! Once you get to the top – the views are absolutely breathtaking! You have a 360 degree view of all of Paris and it wasn’t that crowded for a Saturday

5. When you’re done with Arc de Triomphe – walk along  Avenue des Champs-Élysées where there are a ton of shops, street performers, restaurants and free wi-fi lol. We got hungry so we ate at Cafe Di Roma & embarrassing story – they gave us free bread and olive oil but no plate to put the olive oil in and then they brought a smaller dish that looked like an ash tray but I smelled it and it smelled clean hahahah so I pour the olive oil in the ash tray and the couple next to us start laughing that i’m dipping bread in oil in an ash tray… so I stopped and definitely felt embarrassed but what was i supposed to do?!

6. While you’re walking through Avenue des Champs-Élysées you’ll pass the Grand Palace and two famous theaters, the Place De La Concorde, the ferris wheels that looks like the London Eye, the beautiful Jardin des Tuileries garden and then you’ll end at The Louvre!!

7. After the Louvre, I wanted to see that love lock bridge that everyone talks about – The Pont Des Art bridge over The Seine River.. But, I forgot that they cut the locks down because it was too heavy for the bridge.  There are locks in other places near it but not the one that everyone was talking about haha

8. We walked to Notre Dame about 10 minutes away and got to go inside the Cathedral – it’s so big! & I heard you can go up to the top to see all of the gargoyles but we were so tired by then!

Okay, so we did so much stuff while we were in Paris for 24 hours! I bet you could do way more if you got up earlier though! I’m sad that I didn’t get to eat gelato at Amorino (everyone was telling me about it) and since we weren’t staying in a safe neighborhood in Paris (We were in the 18th district) – we decided to head back before it got dark just to be safe! Next time we come back we want to stay in the heart of Paris and stay up late to see the lights on the Eiffel Tower light up.

Hope you loved reading this!!

Hi! I'm Lizzie! Welcome to my lifestyle blog where you can follow along on our travel, food, fitness and family adventures! Currently in Los Angeles, California.

You do a lot of thinking when you are in a car driving for 3.5 hours delivering cake tasting boxes all over greater Boston & the city 😅 anyways - I had this thought where we are all truly still in survival mode! It may not look like it on Instagram because 95% of the time, we are only posting the highlights & the happy moments of our lives on here! You don’t want to know how many times i screamed at connor the past 2 days 🥴 I just want you to know that it’s okay if you don’t post on IG every day, screw the algorithm and be okay that you are present with whatever you are trying to do - whether it’s keeping your family alive during this pandemic or hustling so hard on your business, etc etc.. & it’s okay if you are in survival mode because then it makes all of those small wins in your life feel so much better! I have no idea what I’m talking about but just know that you are not alone in whatever you are going through!!!!! Love you all!!!!
Introducing Blood Orange jUice and Mandarin Orange Juice from @freshupyourlife.usa! I always love working with high quality ingredients in my baked goods! You are going to love these blood orange dark chocolate cupcakes flavored with blood orange and mandarin juice!! Find the recipe details in the first comment! #EnjoyItsFromEurope #FreshUpYourLife
I can’t wait to show you all of the wedding cakes I’ve made this past year!! Throwing it back to one of my favorites - @michaela_rothmann’s 4 tiered wedding cake! So if you’re looking for a wedding cake, mention this IG post and I’ll throw in a free mini anniversary cake so you don’t have to freeze frozen cake for a year!! Cheers to engagement season !!! 💍 I’ll also be launching January’s tasting box soon! You can message me if you want me to put you on the list to reach out to for first dibs on the box! 📸 @anneleephotography ✨
Give the gift of education! This holiday season, one thing our family wants to look into is​ college savings plans for Connor! This is a great gift idea when immediate family members ask what he wants for Christmas! I love that it helps you reach your (or someone you love’s) child’s educational dreams! I know saving right now seems unrealistic since they are so young, but I know it’ll be worth it in the end when that time comes and he leaves our home!! (secretly crying tears) I’ll link @mefa_ma’s website in my bio and stories so you can learn more! #ad 📸 @alishanordenphotography
This year’s peppermint cake! 😍 seriously, you guys - thank you so much for all of the love and support you’ve been showing me and my family! My mom is in awe with all of the kindness that she is receiving. She is doing a LOT better and i think mentally is in a better place than when she was when she first called me to tell me about her accident. Also the people in Hawaii, are some of the KINDEST people she’s ever met! My heart is so full, this community is truly the best!
Even though bad things happen to good people, God is still so so good 😭 my mom was in an awful car accident 3 days ago while vacationing on the big island of Hawaii. Both her legs shattered in the accident and she has undergone one surgery on her right leg and is waiting for surgery on her left leg once the swelling goes down. Doc says that the swelling could take 2-3 weeks minimum to go down so right now she’s currently living at the hospital trying to recover! I posted on my stories and received hundreds of kind messages, calls and texts from friends and just amazing strangers willing to help out! We are still trying to find housing for my stepdad to stay long term while my mom is recovering, so if you know anyone on the big island that lives near Queen’s North Hawaii Community Hospital in Waimea, please message me! My brother started a go fund me that you can find in my bio, honestly anything helps! My mom is going to hate me when she sees this because Chinese people don’t like asking for $ but the first thing she told me on the phone was how stressed she was about the future hospital bills 😭 thank you all so much for your love and support 💕 keep praying and sending good vibes her way!!!! I know she’ll pull through!!!